2016 has been a huge character building year for me, which forever seems to be an ongoing process and something I've accepted now as the way of life. We had a good crack in Supersport with a budget that was nowhere near what we needed for the class. I had to take a step back to re-evaluate what direction my career could take, and if and what we could afford to do. Thanks to Steve at Morello Racing, I've had an opportunity to finish the season in Superstock 1000, on a Kawasaki ZX10.

Donington Park was the 11th and second to last round for the British Superstock 1000 class held over the weekend. It is a track I know well, working for the Ron Haslam Race School every few weeks as an instructor there. It is also a track I really enjoy riding, scoring my first British Championship podium there in 2015 in Supersport Evo.

The team made the call to miss the first practice session on Friday, due to it being wet, and we knew the weather would clear for the afternoon. Donington is notoriously slippery in the wet, and if we had suffered a crash in practice, we may not have got the bike out in time for qualifying in the afternoon. We knew I needed as much time on the bike as possible, but it was the right call to make, with a number of teams opting to miss this session, and for the riders that did go out, a number of those hit the deck. Qualifying 1 held Friday afternoon was my first run out on the 1000 at Donington. The bike works well, but me working with the bike, there was a lot to learn! I know exactly where I need to be on the track at Donington, but to get a 1000 on to those lines, when I'm not riding it correctly is another story! I've spent a lot of years on a 600, so I naturally ride all bikes like I would ride a 600, which is a huge part of my learning curve and what I need to do to adapt my riding style to suit a 1000.

We had another Qualifying session on Saturday, where I improved my time by a second and got closer to the guys at the front. I finished combined qualifying in 20th position. I had tried to not set to many expectations on my self for the weekend. All I wanted to do was improve every session and learn what I needed to work on to improve riding the 1000. So for me, so long as we finished the race further up than where I had qualified that would have been a good result.

Sunday was much hotter than the previous two days, and with a shortened warm up session, I was unable to get good feedback on some changes we wanted to try. The race started well and I was battling with a good bunch of riders for 14th position. A safety car came out for two laps and then a red flag, after a rider had clipped the back of me and then highsided with another rider crashing behind him also. The race was cut to 10 laps for the restart. I got away well and moved up a couple of positions. The way the bike handles and what I need to do on the bike to make it work is very different to what I'm used to, and my shoulders and forearms were getting a workout like never before. I didn't run the pace for the whole race that I would of liked to, and this is an area that I will be working hard on and improving. But I held off some seasoned campaigners in the class to come home in 14th position, bagging some championship points in my first outing in Superstock 1000. I am proud of the result we achieved, I know I have so much to learn to ride this new machine, that it isn't going to happen overnight, but everyone at Morello Racing supported me 100% and worked hard to give me the best chance to do the best I could out on track.

Photos Credit and thanks to: Walker Sport Pics 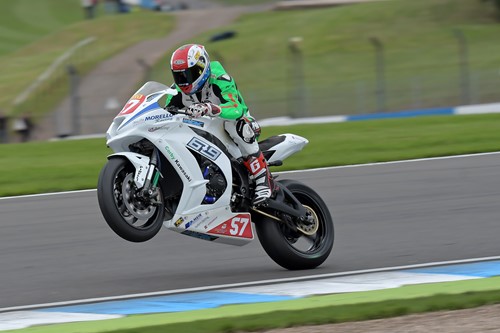