Round 1 of the 2017 British Championship - Ducati Tri Options Cup

Round 1 of the 2017 British Championship - Ducati Tri Options Cup

The first round of the 2017 British Superbike season was held at Donington Park over the first weekend of April. This season I am racing for BPS Racing on a Ducati 899 Panigale in the Ducati Tri Options Cup. The class is for 959 and 899 Panigales all competing on an extremely level playing field. There are very few modifications that can be made to the bike. I came in to the team quite late, who were kind enough to put me on their 899 from last season. The power delivery of the Ducati’s is very different to the 600’s and 1000’s I’ve ridden for the last number of years, and it’s been an exciting weekend understanding how best to adapt my riding to suit the amazing torque of the Ducati engine.

Friday’s practice session was hampered bike a small issue with the gear lever on the bike, which meant we missed half the session. I had some productive laps towards the end though and took away some constructive feelings. We made further progress in Qualifying, which was held on Friday afternoon. By this point I’d done 20 laps in total on the bike. I qualified 12th and was the first of the 899’s in a field of 52 riders of combined 959’s and 899’s. We hadn’t made to many changes with the bike so far, as I was learning a lot every time out on the bike, that until I feel I can push the limits, it didn’t feel necessary for us to make any major adjustments to the bike.

Our 9 lap race on Saturday was prematurely ended on lap 5 when a bike had a severe blow up, spewing oil all over the track. Unfortunately a number of riders were quickly caught out by the oil, before the red flag with thrown by all the marshals, who did a great job getting the race stopped as quickly as possible. The crashes proved far worse than anyone ever hopes for, and a rider succumbed to his injuries sustained in the crash. I would like to send my deepest condolences and best wishes to the family and friends of Mick Whalley at this difficult time. The Ducati riders all had a meeting and unanimously voted that we could race on Sunday, out of respect for Mick as that’s what a rider would generally want, for everyone to get out on track and do what we all love.

I was placed in 15th position on the grid for Sundays race, as our position goes off our lap time set in Saturdays race. We had been having some trouble with the brakes, with them going off extremely quickly; not allowing me to brake as well as I knew I could. I got a strong start and was inside the top 10 from the first lap. I was able to tag onto the front group for the first lap, but within 3 laps my brakes were coming in to the bar again. I did what I could and rode it home to 8th place. I am pleased with that result considering the issue we had with the brake. I was also the top 899 again, which I received a trophy for, which is always nice to bring home! I believe that with the better brake, we could have been a few positions up, even with the limited time I’ve had on the bike. We are evaluating whether we will be able to be podium contenders against the 959’s on the 899 Panigale, which is something we need to understand and decide on quite quickly. I am pleased with how the weekend went for us, with limited time on the bike and little understanding of how the Ducati works, the team at BPS Racing worked really well helping me to adapt to the bike as quickly as possible.

Thank you to everyone at BPS Racing for the hard work over the weekend. A huge thank you to AJN Steelstock for coming on board as my major sponsor, and all my other sponsors and supporters. 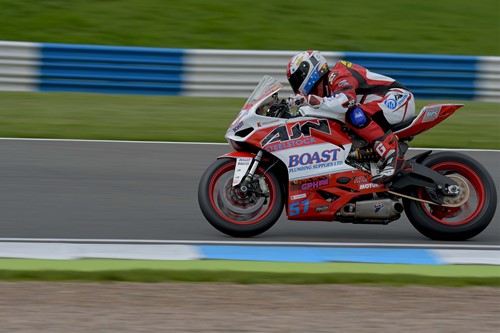