Round 3 of the British Superstock 1000 Championship was held at the Donington Park National Circuit over the weekend. This was the first time BSB had raced on this circuit layout, which misses out the ‘melbourne loop’ which was added a number of years ago to comply with minimum length required to run MotoGP. The rest of the circuit remained the same, but added in a new combination of esses going on to the start/finish straight.

Each time I have ridden the Aprilia I have been able to take away a lot in understanding how best to adapt my riding style to suit having 200hp at my disposal! My team have been great in teaching me the many different things that help get the most of the Aprilia and every time I go out on track I’ve got some new things to work on. This weekend was no different. When I used to race 125’s I used to treat the throttle like an on/off switch. It was either at 100% or at 0% for braking. These bikes only had about 48hp. So just smoothing out my throttle response to keep the bike calm was a big area for me to work on. As the saying goes “you’ve got to slow down to go faster” and this was becoming apparent to me.

We had two 25 minute practice session on Friday. The day was steady weather, and I made sure I used the practice sessions as just that... Practice. I was able to fine tune some of my riding and work on what we wanted to work on as a team. I was 11th in Free Practice 1.5 seconds off the quickest time. In Free Practice 2 we made some good progress forward. I finished FP2 in 4th position, closing the gap down to the front to 0.6 of a second. I was pleased with how the day had gone and how good the bike was feeling. We had worked through some good set up options on the bike and I was getting good feedback from the Aprilia RSV4.

This weekend was one of the race weekends that we have the ‘100 Mile Race’ Which is where we do a full race distance, followed by a 10 minute break to fuel up, change tires, have a quick splash of water and off we go again for another full race distance. At Donington this meant two 22 lap races back to back. So Saturday was filled with a 25 minute qualifier and the 100 mile race in the afternoon. We made some subtle adjustments to the bike for qualifying, and they felt better, giving me that feel us racers are always searching for. I was steadily making progress, hovering around the top 10 for the whole session. I managed to get a good run with 30 seconds left to go on the clock and bang out a lap where everything came together well, putting it 3rd on the grid, behind championship leader Richard Cooper and Taylor Mackenzie. I was really happy with the lap time, getting to within half a second of Coopers time, who has been in a class of his own in many of the sessions.

I was pumped for the 2 x 22 loppers that afternoon. The weather was mint and there was a positive buzz in the garage, as there always is. My starts aren’t great on the Aprilia, which has always been a strong point of mine over the years. Again, just another area to keep working on! I got away for Race 1 ok, and was in the top 6 on the opening lap. I managed to stay with the front group for the first 10 laps, setting a good pace and learning heaps. I made a few small mistakes and lost my rhythm from being over taken a few times. I finished the first 22 lap race in 8th position. A quick turn around in the pits and we were back out for race 2. Again I got off the line ok and got into a good rhythm with the front boys. My race rhythm wasn’t as strong as it shouldn’t of been and I suffered for this. I finished race 2 in 10th place. Two top 10 results wasn’t bad, and for my third Superstock 1000 race I am pleased with that, but after qualifying third, I know within my self that the pace is there to be battling closer to the front. The bike is most certainly capable, and as my riding improves on the Aprilia, I know we can get the job done.

We had a third and final race on Sunday. The grid positions for race 3 go off the fastest laps set from Saturdays races. Although my finishing positions were 8th and 10th, I had set the second fastest lap, only 0.006 of a second off the race lap record! That was a huge positive for me to take away from Saturdays races. The weather took a turn for the worse on Sunday and the rain came down hard about an hour before our race, and continued right up until our race. There was no need to worry about what tires to go out on, this was a full wet race! As most people who have followed my racing will know, the wet is an area I’ve really struggled to have any feel in for years and years. Starting second in a British Superstock 1000 race, I was thinking to my self ‘I’m gonna look a fool here!’ But we have had some wet testing already this year and the Aprilia felt amazing so the other side of me was quietly thinking ‘you can do this’. We set off and I dropped down to 5th. I was able to tag on to the front group and get going at a good pace. Everyone was having little moments, with the rear sliding, or coming around on the entry in to turns. But I was finally able to feel this and get the bike moving around a little, but control it as well. On lap 8 I had a big moment down Craner Curves, known for sending bikes to the scrap heap... I held on to it but ran off doing about 100mph. I lost 7 seconds that lap to the group in front of me, which put me in the clutches of the riders in pursuit. I got my head back down and felt my focus really improved from the dry races the day previously. The track was starting to dry out a little with about 6 laps to go, but know where near enough to ever be a problem. Our tires did start to slide around a bit more, and our lines were all changing slightly due to this. But I was able to bring it home for 6th position! For me this was a huge huge result, as in previous times, I would have been expecting to be outside the points. It was a really positive end to the weekend. I feel like I made some big steps forward this weekend, getting closer to where we know the bike can be. It’s just a matter of me chipping away and working hard to get my self up there.

I cant thank Ian and Myra from IN Competition for all their hard work they do for us. Johnny and Dave my mechanics, Darren for his help spotting and the help with our sponsors. All the rest of the team and my family, Katie for being in my corner and supporting me through it all! I owe a huge thank you to AJN Steelstock who make all of this possible for me, to have this amazing opportunity along with IN Competition. And all my personal sponsors who offer amazing support! Roll on Brands Hatch in 3 weeks time! 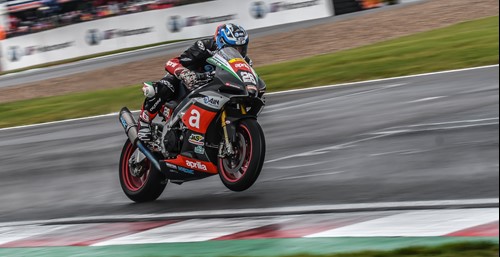