Round 4 of the British Superstock 1000 Championship was held at Brands Hatch GP circuit over the weekend. Brands is a really cool circuit, home of the World Superbikes in the UK for many years. Half the circuit is in a stadium like complex, with banks of spectators lining the fence. The other half consists of really fast and undulating corners, flowing through woodlands. Like most UK circuits, it has its own character and it always provides great racing. I’ve never thought of Brands as a super strong circuit for me, as i’ve had some bad luck in the past, but I always go in to each weekend with a fresh mind.

We had two practice sessions on Friday. I finished in 2nd place in Free Practice 1, behind championship leader Richard Cooper. The IN Competition Aprilia RSV4 was feeling really good and I felt right at home on it. After a positive weekend at Donington, my confidence is growing each time out on the Aprilia. We made a couple of little changes for Free Practice 2, where I managed to top the time sheets and finish the day with the fastest time. It was great to finish the first day so strong, and was by far our best Friday of the season to date.

Saturday was a very busy day. We had qualifying at 9:40am, and then 2 x 16 laps races at 1:15pm. I went out in qualifying and the bike was feeling great, felt just as at home as I did on the Friday. We put a new rear tire on to push for a good lap time, and I was on a strong lap. Into the final turn how ever, I push a little to hard on the entry, and tucked the front, sending me and the bike into the air fence. Obviously not the way I was expecting that to go! When you are pushing to be on the front row, you are always riding close to the limit, and I just went over that slightly in qualifying. This meant I had to start 14th in race 1. I did quite a bit of damage to the bike as well and there was only 3 hours before we had to be ready for the races. The team did absolutely amazing, replacing the Forks, Yolks, ECU and so much more to get me out on track. I cant thank them enough for getting the bike ready for me.

Race 1 I got going reasonably well and got into 12th on the first lap. A 16 lap battle ensued for 7th place, where I finally placed in 9th at the end of race 1. It was at the end of race 1 I started to realise that perhaps I had taken more of a beating than I first though from the crash in qualifying. I was feeling really beaten up, and also quite sick. I guess tumbling through the gravel and hitting an air fence at high speed will do that to you! After race 1, we have 10 minutes to change tires and refuel, before going out for another 16 lap race. It’s a hugely mental and physical task to do these two back to back races, but I really enjoy doing them and I’ve felt my second race has always been pretty strong. I started race 2 in 9th (the finishing position from race 1). My starts have become better recently on the Aprilia and I got off to another good get away in race 2. We managed to get dragged along with the front group in the first few laps, which helped me gap the riders I had been dicing with in race 1. I got into a good battle with Ben Godfrey and my team mate Lewis, to battle for 4th place. I passed Lewis with a couple of laps to go, and did everything I could do pass Ben on the final lap, but couldn’t make a move that would stick, crossing the line in 5th place. I was really happy with these two results. After the big crash in qualifying, just to get out for the races is a huge testament to how well the team are working. And feeling pretty beaten up from it, I was happy to take two strong top 10 finishes. After the races it had really taken it out of me, I couldn’t stomach any food and was in bed by 8pm that night.

We had a 3rd 16 lap race on Sunday. The weather had been really good for Saturday, and it couldn’t have been much different on Sunday! It was raining heavy from early in the morning with a bit of wind blowing about the place as well. Our race was early, at 10.45am so a wet race it was. I had qualified 5th, going from the lap times in Saturdays races, and I got a really good start. I was up to 3rd, before Alex Olsen and me ran wide mid way through lap one. Starting lap two, coming down paddock hill bend, Alex high sided right in front of me. I was running in 6th for most of the race, and the track started to get dry patches mid way through the race. I was feeling strong in the patchy conditions and my lap times were dropping a little. The rain then came down again with 4 laps to go, and I was a bit steady on knowing how hard to keep on pushing with the track getting slipprier. I was able to bring it home in 8th position. After a solid 6th in the wet at Donington, I was pleased with another top 10 in the wet at Brands Hatch, as the wet is something I’ve struggled with for some time now! It’s good to show that we are making good steps forward in all conditions. 3 top 10 finishes over the weekend promoted me from 10th up to 8th in the championship standings. I can’t complain with that after what could have been much worse after the get off in qualifying. I do believe though that had we qualified better, like our practice pace showed, we would have had a stronger weekend than we did.

I cant thank my team enough. IN Competition Aprilia worked so hard this weekend, as they do every weekend, to ensure I had an amazing RSV4 underneath me in every session. I’m sorry about my crash in qualifying, they did amazing to get me out for the races. I am pleased with the pace I was running for most of the weekend, and I’m confident that we are closing that gap to the podium, where I hope we can be fighting for soon.

A big thank you to my Major Sponsor, AJN Steelstock for making it all possible, along with all the team and personal sponsors. I’m really looking forward to Knockhill, in Scotland, coming up in just under 2 weeks! 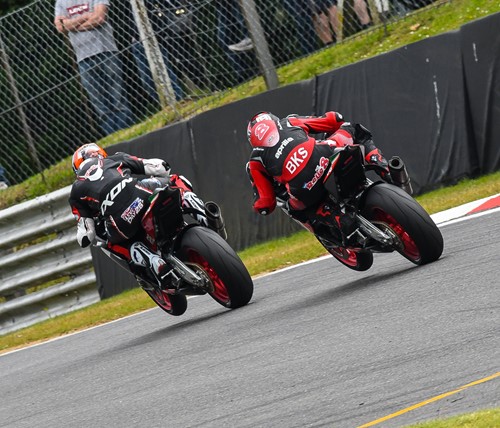